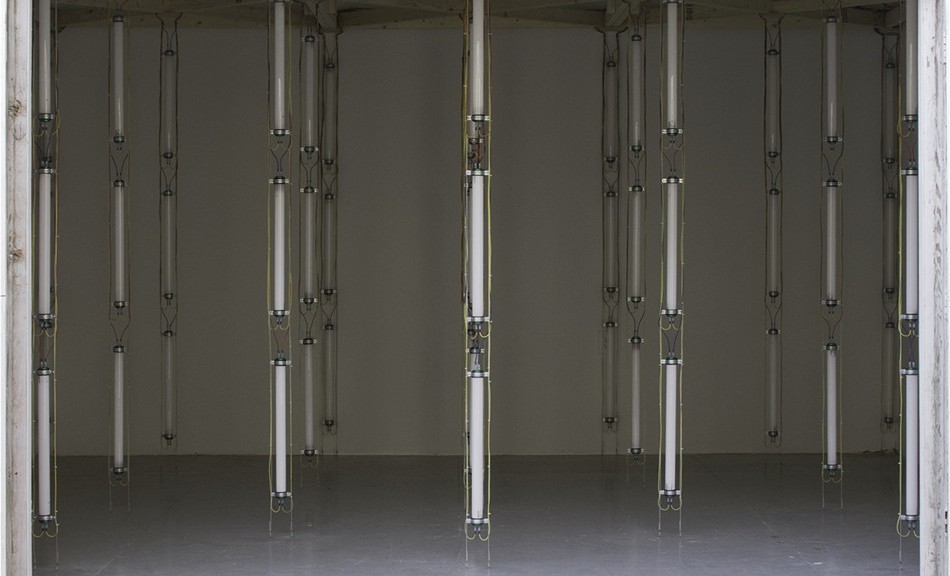 aka “The Big Bang Project”

This is the second project I did with Ezra Masch (see the 72-channel Color Organ). We wanted to make a more immersive light environment that was more sensitive to the musician’s nuances than the Rhodes project.

This time we used a live drummer, with a kick (bass drum), snare, and hi-hat. We wanted each drum to control a bank of lights, with more lights turning on the harder the drum is hit. We decided to have 4 levels of “loudness”, or 4 amplitude bands  (soft, medium, loud, very loud).

We put the drummer in one room, and filled another room with the lights. There were three layers of 23 lights each, for a total of 69 fluorescent tubes arranged in a hexagonal matrix.

Each drum had a sensor (piezo element, aka “contact mic”). The sensors ran into my modular synthesizer where the signals were split into 4 amplitude bands, cleaned up and sent to a custom-built relay box. The relay box had 12 relays, each one turning on a 120VAC circuit when it received a 5VDC signal on the input. Each relay controlled a bank of lights in another room. 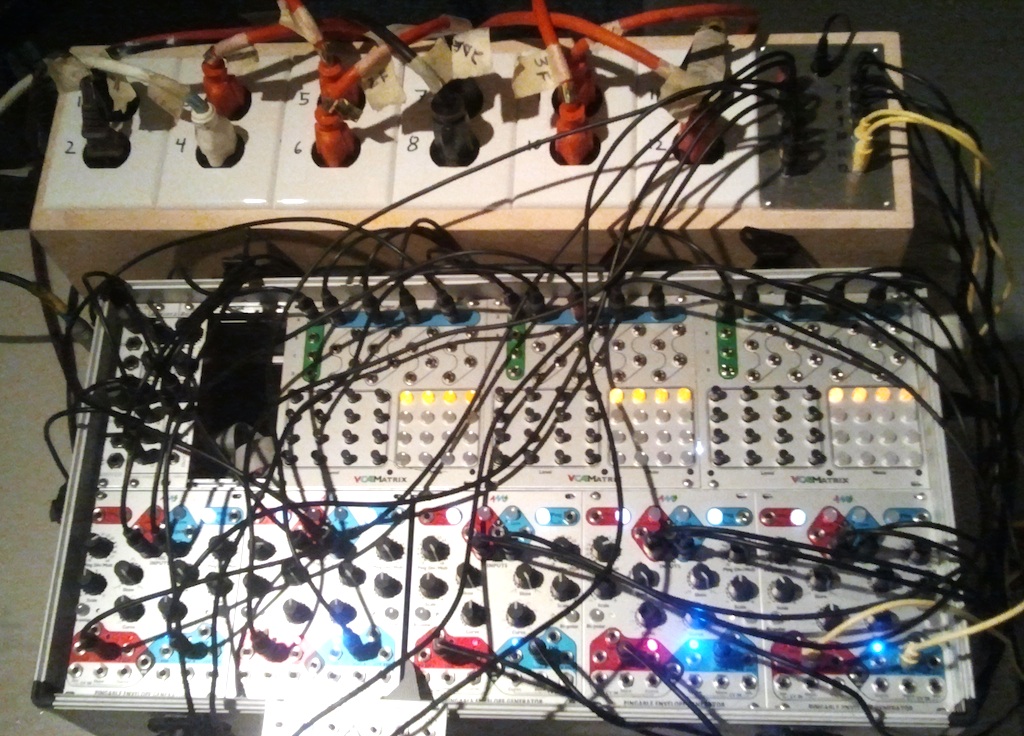 If you are familiar with modular synthesis, the following might make sense. Simply put: Contact mic -> Gain stage -> Four-way splitter -> Variable attenuation -> Trigger to gate converter (with Variable gate length) -> Relay box.
Here’s the patch in detail: I patched each of the three contact mics into a level booster (“Gozinta” module by Circuit Abbey), to provide lots of gain and to make use of the clipping LED (so I could check that the mic hadn’t fallen off!). I then patched each of these three outputs into a VCA Matrix channel configured as a single-input, four-output splitter. I attenuated each of these four outputs a little bit more than the previous one to provide four outputs, each of a different amplitude. These are the four amplitude bands for each mic. At this point we have 12 signals running (3 mics split into four bands each). Each of the twelve outputs ran to the Async Trigger jack on a Pingable Envelope Generator, to convert the audio wave into a steady gate signal. The P.E.G. has a triggering threshold of 3.5V, so by attenuating the signal on the VCA Matrix in different amounts I was effectively adjusting the amount of amplitude on the contact mic required to trigger each P.E.G. channel. I then took the gate output on the P.E.G. to trigger the relay box. By adjusting the Ping time on each P.E.G. channel, I could adjust the length of the output gate. This was very important because the contact mic outputs dirty triggers (multiple spikes, variable lengths, glitchy stuff…) but fluorescent lights want to see steady on or off conditions. They also need to have AC current for a certain amount of time before the light will turn on. We had different ballasts in our lighting rig, so each one had to be tuned differently. 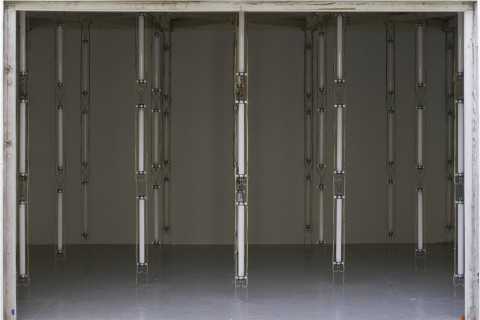 The lights were fluorescent tubes standing vertically in columns in an empty room, 69 lights total. Each column was made of 3 tubes (bottom, middle, top), giving us three layers of lights. The bottom layer was controlled by the kick drum, the middle layer by the snare, the top layer by the hi-hat. Also, the columns were arranged in 4 concentric rings that corresponded to the 4 amplitude bands (loudness response). So there was a center column, then a ring of 6 lights around that, then another ring, and a final perimeter along the edge of the room. A soft tap on the drum would just trigger the inner lights. A medium hit would trigger the center light and one or two rings around that, and a hard hit would turn all the lights on (for that layer only). 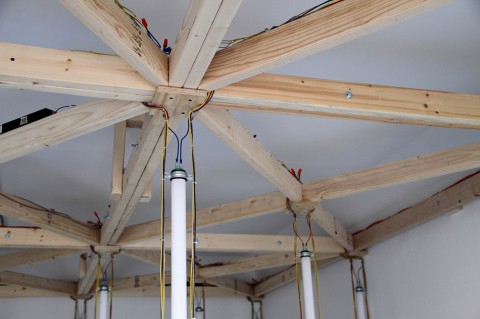 As you might know, fluorescent lights require a ballast, and wiring 69 lights isn’t trivial. Ezra took charge of this project, framing out a ceiling structure to attach each column of lights and to run the wiring overhead, and then taking a few late nights to do the wiring. We used crimp tabs (0.25″ faston style) and solid copper wire and tons of zip ties. It all had to be done very neatly because the audience was invited to walk through the forest of light tubes, and this was to be shown to the sculpture department! 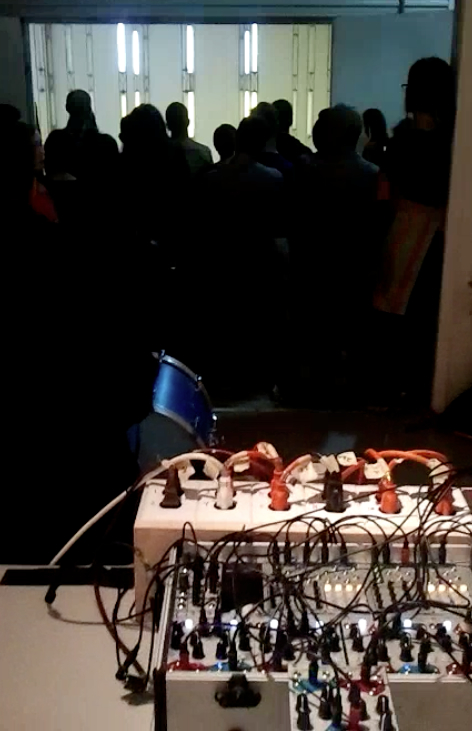 The performance was at University of Texas’ Sculpture Department in March of 2012. The audience stood facing the light room, and the drummer played in a raised room behind the audience. It was critical that the drummer was watching the lights, and the audience was not watching the drummer. Two different drummers played, with a break in between. I kept my hands near the controls in case a mic slipped or the thresholds needed adjusting. Everything went smoothly, but at the very end of the last drum riff, some of the relays started acting wonky and stuck on. This was clearly because we were using the relays outside of their intended use by flipping them so fast for so long. To prevent such things in the future we would need a budget for industrial grade relays that can handle switching at low audio rates for prolonged periods (around $100 each, times 12 relays…). However, we were lucky this time and it didn’t ruin the show!

The Big Bang Project from Ezra Masch on Vimeo.