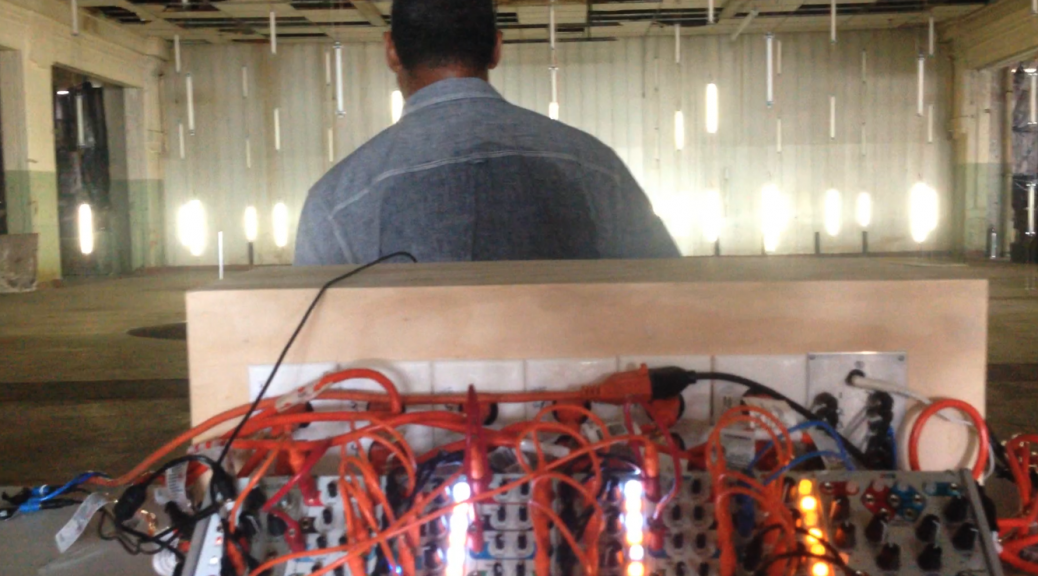 Doing it a second time…

The first installation was in Austin, TX, in a trailer behind the Sculpture Department at the University of Texas. In the spring of 2014, Ezra contacted me about doing the show in Philadelphia, but doing it bigger and better and re-building everything from scratch. Sure, why not?

This time we wanted to make some improvements. We used more columns of lights and spaced them out so that the audience could walk bewteen the columns of lights. We also agreed to use solid-state relays instead of magnetic relays, because so many of the magnetic ones had stuck open or closed after being hit with high frequencies for so long. Ezra also had some better ideas for quick starting ballasts and tubes, and I had some better ideas for the synth patch.

The installation was set up for Force Field Project in a warehouse in the Kensington neighborhood of Philadelphia, PA, in June 2014. I flew in a few days ahead of time, assembled a new relay box and helped with wire the 75 light tubes to ballasts, and the ballasts to the relay box. Other artists were milling about, assembling their projects all over the building (including inside the ventilation shafts and on the roof). Sadly, the party was closed to the public at the last minute because of zoning/code issues. We were able to run the installation anyways and take videos, but only the artists got to see it in person. It was awesome– it was amazing to witness the room explode in light to the drums, and walk around in the matrix. We were determined to let the public see it too, so six months later we set it up in a (legit) art gallery, making it bigger and better than ever.

The mics and the synth

Just like last time, there were three drums, each with a contact mic. Each contact mic ran into a pre-amp module that boosted the level (and gave me a master volume knob). Each pre-amp output ran into a Shifting Inverting Signal Mingler (SISM) module, splitting the signal into four outputs and giving me an attenuator on each output. This is how I set four different amplitude bands for each drum. The four attentuated outputs then went to the four channels of a QPLFO module running custom firmware to generate one-shot pulses. When the drummer hit hard, all four SISM channels would send a voltage greater than the QPLFO’s threshold and so all four QPLFO channels would send a pulse. When the drummer hit soft, one or maybe two QPLFO channels would send a pulse. I could control the pulse width of each QPLFO channel by tapping a tempo and/or adjusting the Skew knob. By adjusting pulse width and sensitivity of each light group, we could create some cool effects.

We had 12 relays and 21 ballasts, powering 75 lights. Three relays had large heatsinks that let them handle up to 10 amps in order to switch on/off three quad ballasts each (12 light tubes per relay) (note: we only needed about 6A per relay to power 12 lights, but having a better heatsink cost the same amount). Three relays had smaller heatsinks to let them switch on/off two quad ballasts each (8 light tubes). The remaining six relays didn’t need a heatsink because they only powered one ballast each (three quads and three singles).

The lights were arranged in a concentric grid (12 around 8 around 4 around 1 in the center). The grid was repeated three times in vertical layers. The larger circuits powered the outer rings of lights, and the smaller circuits powered the inner rings. The three layers corresponded to the three drums (kick = bottom layer, snare = middle layer, hi-hat=top layer). The concentric rings corresponded to the loudness of the drum. Remember how I mentioned I could dial in four different sensitivities per contact mic? Well that translates to four different loudness bands, meaning between one and four rings of lights would turn on whenever the drum was hit, depending on how hard it was hit.

We only got to play with this set up for an afternoon before we had to take it down. After spending a week installing everything into the building’s ceiling and floors, it was quite a rush to see it work.

Next: The third installation at the Crane Arts Center’s Ice Box: December 2014.